For the first time in the 2019 Ranking, two cities became leaders. Drohobych and Pokrov received 79.1 points each. 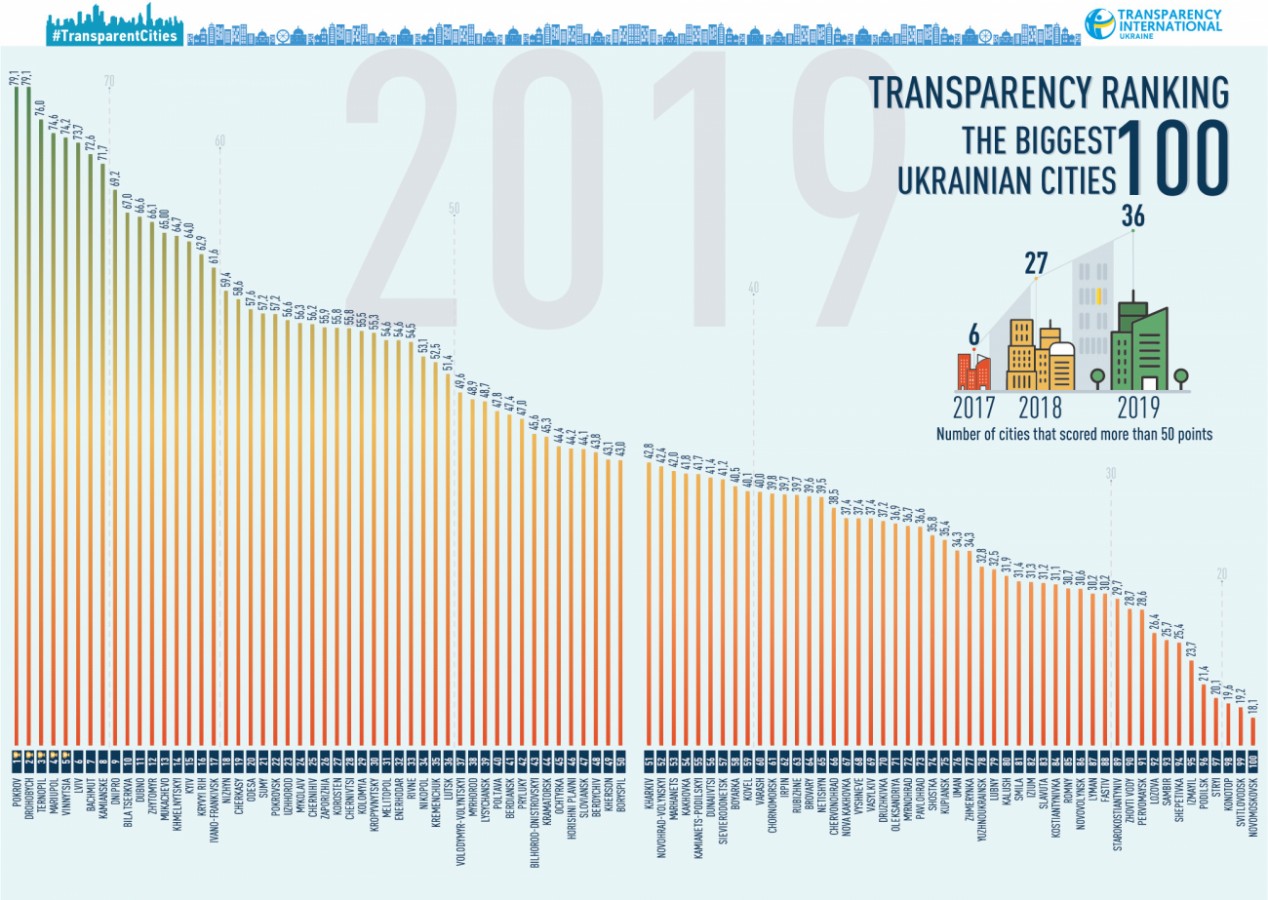 Interestingly, Pokrov, that came in 1st this year, ranked 91st out of 100 in the 2017 Ranking. The top three places have changed since 2018. Pokrov moved from 4 to 1, and Ternopil climbed from 10 to 3. They scored enough points to displace competitors  Mariupol and Vinnytsia  by 4 and 5 steps, respectively. 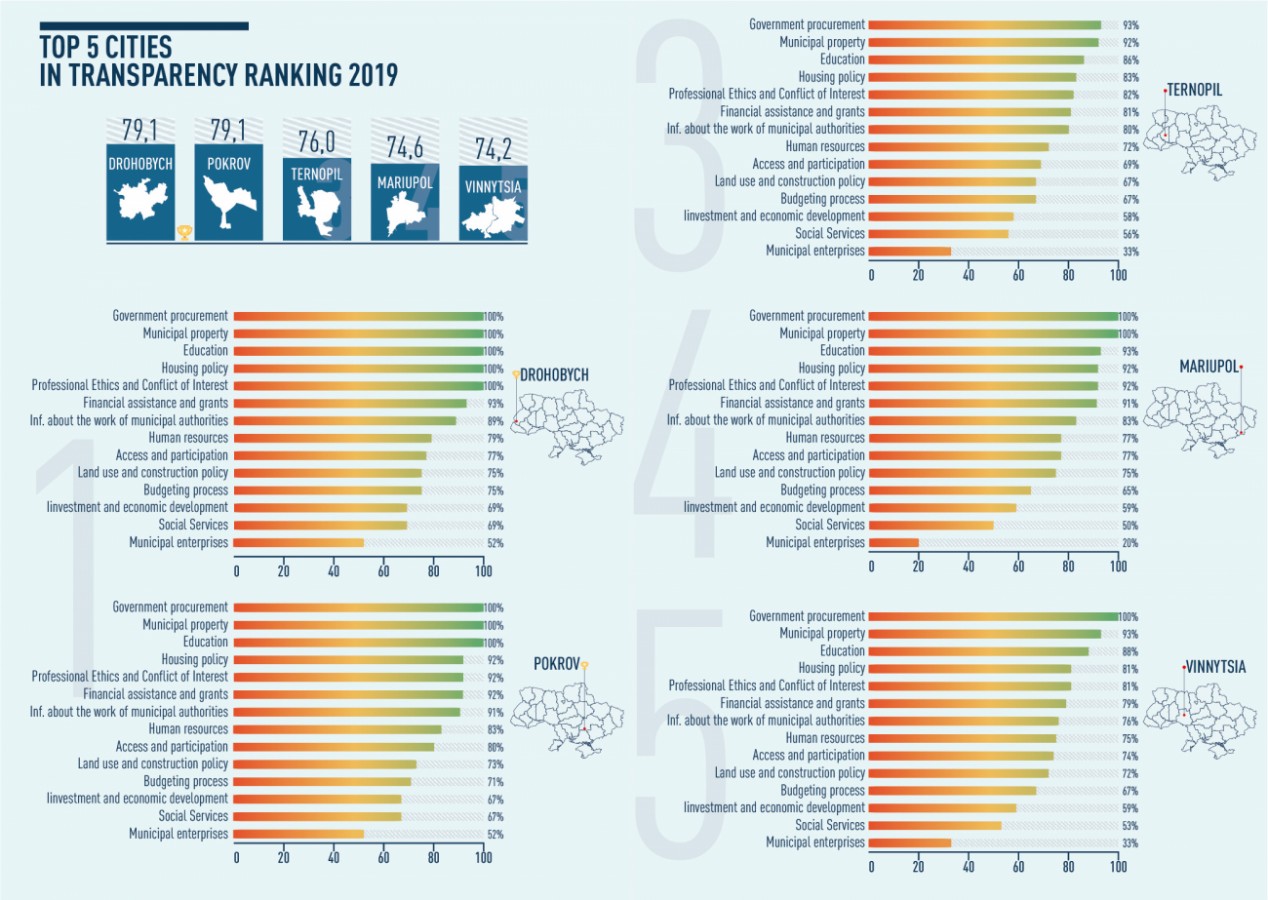 TI Ukraine presents the Transparency Ranking of the 100 largest cities of Ukraine for the third year in a row. It shows how the city authorities disclose information about their activities to citizens and provide them with tools of influence and participation.

We analyze the transparency of cities annually using indicators in 14 areas, and providing recommendations and help in the implementation of best practices in the field. In three years, the average transparency of Ukrainian cities has increased by 53%.

Despite the positive dynamics, the level of city transparency is declining. In 2018, the level of transparency has increased by 12%, and in 2019  by 6%, said the Executive Director of TI Ukraine Andrii Borovyk. It is obvious that the city councils are quicker to implement the recommendations that are easier for them. And the changes in more complex spheres are delayed by the officials for later.

Changes in the top ten in 2019 also occurred. Zhytomyr and Kropyvnytskyi were displaced by Kamianske and Bila Tserkva that joined top ten cities in 2019. 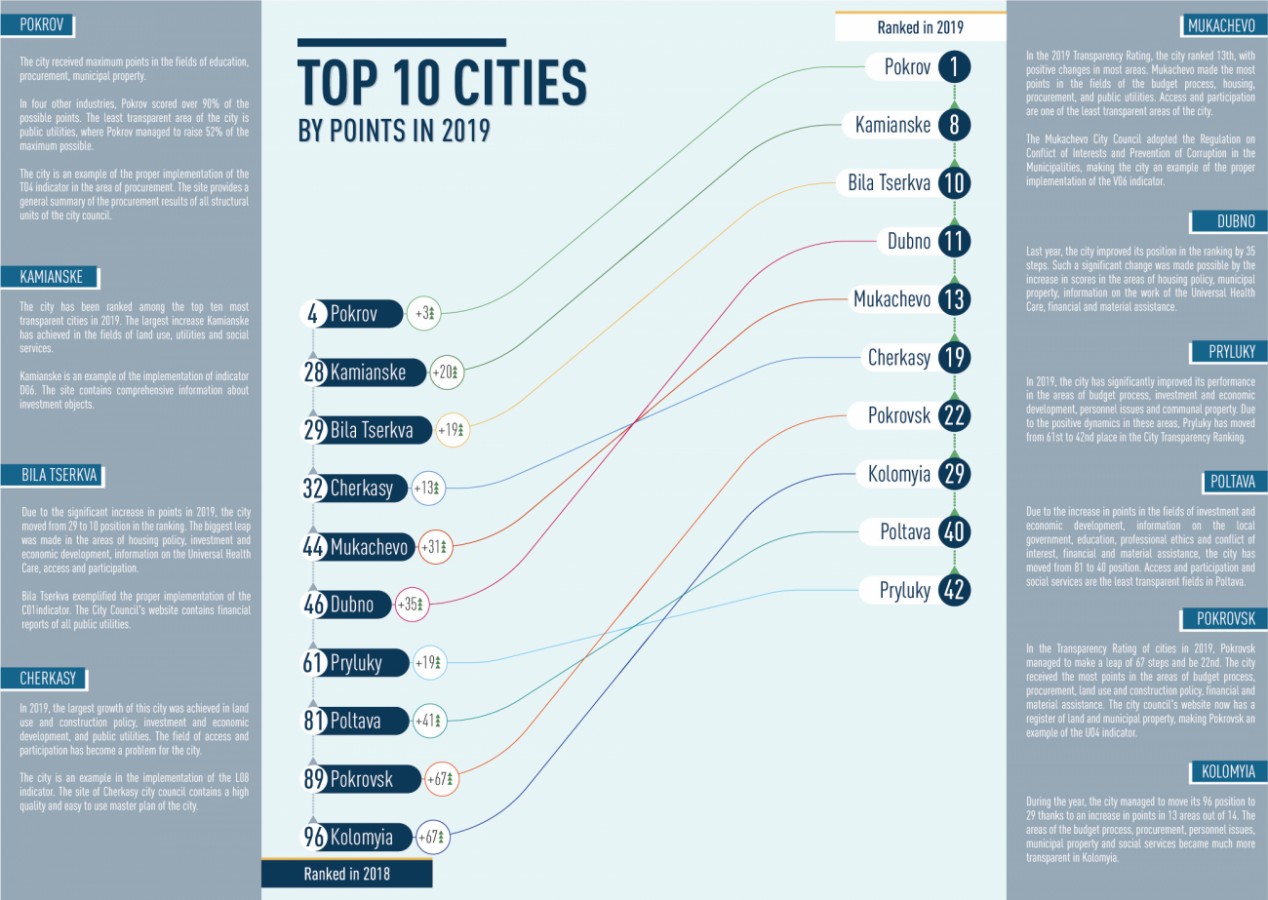 In general, most cities show better results year by year. This years average increase is 8.6 points. At the same time, 8 cities in 2019 added more than 20 points to their previous figures.

The greatest progress this year was shown by Pokrovsk and Kolomiya. They showed that having the desire and political will, in just a year, you can take a leap of 67 positions. It is interesting that in the previous year Pokrovsk moved down from 74 to 89. Such a significant upswing was possible due to the creation of a separate section of the Transparent City on the website of the Pokrovsk City Council, the publication of the necessary information in machine-readable format, as well as the adoption and publication of a number of regulations.

Human resources became the most transparent sphere in 2019. Its transparency reached 68% this year. 22 cities managed to get the maximum number of points in the field of personnel issues because they published competition announcements, reports, and biographies of the candidates for positions. This way, they provided an opportunity to monitor the transparency of the competition.

Access to information and participation of citizens in decision-making was the second most transparent sphere with 66%. This area shows relatively high results for the second consecutive year. The percentage of the recommendations implemented in 2018 among the 100 largest cities in Ukraine was 65%. In 2019, 75 cities have published information about the participatory budget (or the public, party budget, etc.) and the rules for participation. This way, they have significantly increased opportunities for citizen involvement and use of funds.

The least transparent sectors this year were Housing Policy and Social Services with 26% and 25% respectively. Housing Policy is leading among the least transparent areas for the third consecutive year. The secrecy of this area significantly limits the rights of citizens to access information. This year 18 cities have not scored any points in this area. It means that it is difficult to find out how housing is distributed in these cities, who are on record for people in need of better living conditions, and what are community-owned premises. 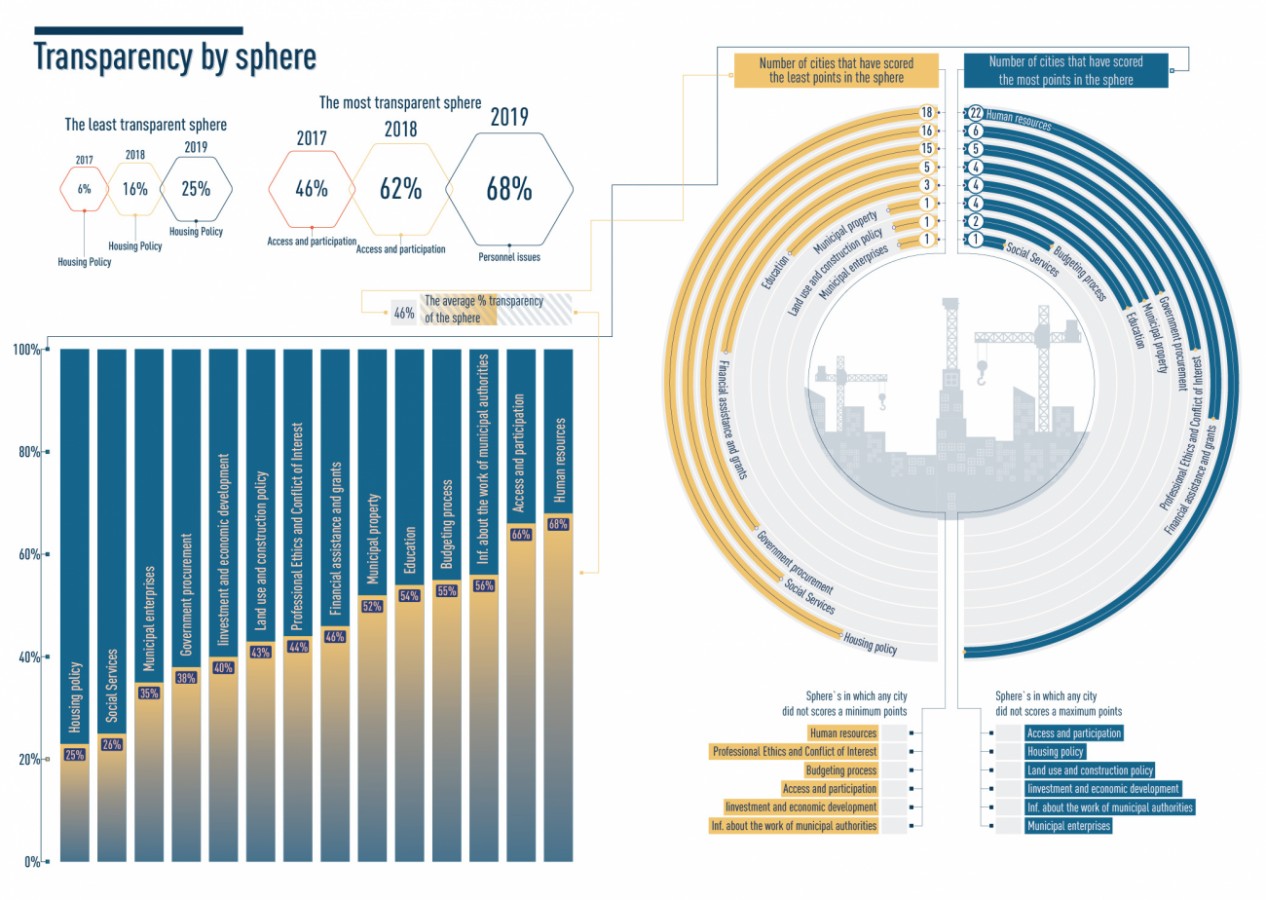 We would like to remind that TI Ukraine is actively helping to promote transparency and accountability on the grassroots level. The Transparent Cities program team is open to cooperation with local authorities and is ready to assist all its representatives, provide advice and recommendations.

The publication was prepared within the implementation of UNDP project Civil Society for Enhanced Democracy and Human Rights in Ukraine with the financial support of the Ministry of Foreign Affairs of Denmark.

The material provided in this publication is subject to copyright. However, the United Nations Development Programme welcomes the dissemination of such informatio for non-commercial purposes.

Updated Methodology of Accountability of Ukrainian Cities. How Will Cities Be Evaluated in 2021?
How Kyiv becomes a digital city
My City Khmelnytskyi. What good practices are being implemented in the city?
How should a city pick itself up from the last positions of the Rankings. Practical tips for Novomoskovsk